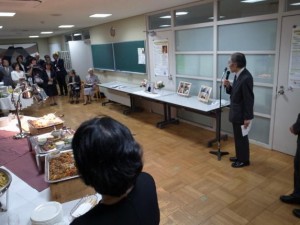 Thank you for your introduction. I am Shigetoshi Kuroda. I would like to say a few words about my remembrance of Kobayashi-san.

You may wonder why I am here as a speaker, since I appear to have little to do with him in research. In the fall of 1962, however, when Kobayashi-san moved from Vancouver to Berkeley, I was at Berkeley as a visiting scholar and met him for the first time. Ever since, I have held him in high regard, although our relations may not have been very close.

I was born in 1932, and so was Kobayashi-san, but he was born before April 1st, whereas I was born after, in June. One year difference in the school year became two years, when the reform of the educational system took place when we were in Higher School. Besides, I majored in physics, therefore I had not known him even by name until we met at Berkeley. Since that time I have been attracted, like everyone else, by his unassuming personality, and have held sincere regard for him, although my feeling towards him might not have been requited.

In the year Kobayashi-san arrived in Berkeley, Kato Toshio-sensei, Professor of Physics and my advisor at the University of Tokyo, also joined the UC faculty as Professor of Mathematics, so we suddenly began to have a lively time of it. For about a year until my return to Japan, both Kato-sensei and Kobayashi-san and their families were very kind and helpful to me even on my private matters. I recall that they called Kobayashi-san’s daughters “Sunn-chan” and “Mei-chan”

At the International Congress of Mathematicians held at Nice, France in 1970, when Prof. Hironaka received a Fields Medal, Kato-sensei was a Plenary Speaker and Kobayashi-san and I were Session Speakers. Both Kato-sensei and Kobayashi-san were accompanied by their families. It was a fun memory that we participated in an outing trip in addition to the sessions. Recently I was filing the photos taken at that time, but for some reason I could not find Kobayashi-san in any photos of the outing trip. I am not sure whether he did not join the outing at all, or he was busy discussing mathematics with his colleagues. The title of his paper in that Congress is, according to the Proceedings of the Congress, given in French: “Pseudo-distances intrinseques sur espaces complexes,” which must be one of his major work. So it might have been for him that it was no time for an outing.

Here are two episodes about him．

As already mentioned by an earlier speaker and as posted in a website, Kobayashi-san, while serving the Math Department as its Chair in 1978-81, faced the formidable task of retaining the Department’s space in the so- called “Space War,” but he skillfully solved that big challenge without brandishing a sword, so to speak. It was around that time, I think, that I had a chance to talk with Kato-sensei (perhaps in Japan) , who casually remarked, “Kobayashi-san is now the Chair of the Department, but he easily finishes the duties of the chair in the morning , and indulges himself in research in the afternoon. It was Kato-sensei’s way of praising Kobayashi-san, but at the same time he might have given me a hint to the effect ‘’You should follow Kobayashi-san’s good example,” because I was frequently grumbling “Department matters keep me busy, ….” It is regrettable to me that I reached retirement age without having been able to follow Kobayashi-san’s example at all throughout the subsequent twenty years.

Now please allow me to change the subject. According to some website, Kobayashi-san apparently liked Chinese food. It’s a bit surprising that he was a foodie. This reminds me of one occasion when we met at Berkeley, which led to a discussion on food: he said with his usual smile, “I really like oatmeal so I have one prepared in every breakfast.”He looked very happy while saying that. I recall that I was envious of him, because I also liked oatmeal but I was a bachelor at that time. We can make simple oatmeal nowadays using a microwave oven, but his breakfast was authentic oatmeal, so I imagine that it was a considerable task for Mrs. Kobayashi to prepare oatmeal every morning. But that must have given him ample energy in the morning and let him win the Space War.

I continued to have chances to meet with him occasionally since that time when he visited Japan. In one occasion I invited him and Komura Yukio-san and treated them to my humble home-made dish, but then the chance of getting together became less often. It was probably in the latter half of 1990’s that I invited him once to Gakushuin University, asking him to give an enlightening talk to our students in the Mathematics Department. We also benefited from him, by using, for instance, his book “Mathematics of circles” in a freshmen seminar at Gakushuin University. But in recent years, however, I regret that I was only observing him from distance at mathematical meetings , saying to myself “Kobayashi-san is still energetic.”

Towards the end of last summer, I was shocked to read his obituary in newspaper all of sudden．What came to my mind then was Kobayashi-san who was, as usual, wandering in a conference site with a knapsack on his shoulder.

This is also information I got from a website (http://hp.hisashikobayashi.com/remembrances-of-Shoshichi-Kobayashi ) which posts the remembrance speech by Prof. A. E. Ogus, the current Chairman of the math department. He says that when he asked Kobayashi-san for an advice about the chairmanship, “he warned me not to try to do big things to make a name for myself.” Despite such a remark of his, I am fully convinced that he must have accomplished a great deal of big things in his life.