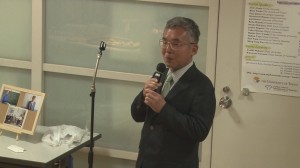 It was about thirty-six years ago (i.e.,1977, the fifth year after I joined the company) that I started serving Professor Kobayashi as an editor of Shokabo Publishing Co., Ltd.

The first book of his that I handled is the one well known to everyone who has studied differential geometry, that is, “Differential Geometry of Curves and Curvatures”(Professor Kentaro Yano recommended Professor Kobayashi to author this book). This book has been especially well sold, considering it is a book for an upper-level course, and the book is still highly rated today (A revised version was published in 1995). As I recall, I could not understand at that time why the book was selling so well. It was perhaps partly because I did not major in mathematics (I will explain this later again when I will mention that Professor Kobayashi knew how to write books that are accessible). There was no email in those days (only airmail was available), so I did not have many opportunities to get to know his personality or to understand his accomplishments well, because we were just exchanging “galley and proofs” (If an author lives near Tokyo, we often meet face to face, which increases our interactions). But since I was involved in editing six books (including the revisions) authored by Professor Kobayashi, some dramas developed with him. I would like to touch on three of them tonight.

In 1999, we published his book “Mathematics of Circles.”As some of you may have noticed, the structure of this book is such that it has a two-layered preface: at the beginning of “Preface”there is a section with the heading “Preamble.”

The time when “Mathematics of Circles,”was in production, i.e., from editing the manuscript until the publication of the book, happened to coincide with the period when the then Commissioner of Cultural Affairs remarked “Quadratic equations have never been useful to my life,” which triggered the shrinkage of mathematics curriculums at schools.

Professor Kobayashi who was always smiling and seldom expressed his anger responded to this development in an unusually strong tone (please see the home page of Shokabo, where the preface of this book is available in PDF) http://www.shokabo.co.jp/mybooks/ISBN978-4-7853-1516-0.htm

There is no way of determining at this point whether the author wanted to express publicly his thought which had not been included in the introduction of the original manuscript, or the editorial group made a mistake by not being aware that the “preamble” part should have been treated as the preface. I wonder whether Professor Yoshiaki Maeda of Keio University may possibly know the circumstance (At the memorial reception the Professor added the remark, “Professor Kobayashi expresses his anger explicitly, when he gets angry.”)

In 2000, we published his book “Differentiation and Integration Textbook.” In most cases we ask a textbook author to structure his/her book in such a way it has the characteristic of a textbook. Because Professor Kobayashi was in the United States (teaching at a university with the education environment different from that in Japan), we decided to ask him to write as he wanted. Since the subject matter was differentiation and integration (subjects I am familiar with), I began to be able to appreciate his accessible style of writing. In mathematical books, we often observe situations where the descriptive rule of a theorem differs from the sequence of thought process taken by a novice of the subject. Prof. Kobayashi, however, explains a mathematical subject in such a fashion that even people who do not major in mathematics (i.e., without sufficient mathematical training) can access with ease. I think it is because he clearly gives “an overall big picture” first, and then presents “a summary of the subject in accordance with mathematical rules.”

In his book “Differentiation and Integration Textbook,” I, as one of the prospective readers, posed to him many questions like “May I interpret this part as follows?” Then Professor Kobayashi responded “Now I understand what you don’t understand,” and made appropriate changes. I think that these efforts have resulted in the reputation that the book enjoys.

What is amazing about Professor Kobayashi is his speed. For instance, a sequel to “Differentiation and Integration Textbook,”which was not originally planned, was published as early as the following year, i.e., in 2001. Around that period, he received angioplasty surgery at Keio University Hospital, and I visited him at the hospital to discuss proofs and editing (although I did no force him to work). He said then “I like to write a manuscript very much, so I enjoy this kind of work when I have heaps of time in the hospital.” But our meeting took place in the hospital where doctors and nurses were busy coming and going. I fear that I might have looked to others as if I were a heartless visitor bullying a patient.

So, I spoke tonight some episodes of Professor Kobayashi and his personality from the perspective of a book editor. May his soul rest in peace.