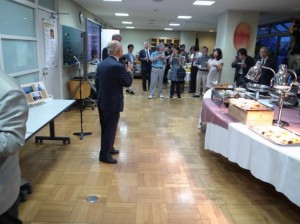 The Mathematician Shoshichi Kobayashi, Professor Emeritus of the University of California at Berkeley, passed away in August 2012. I heartily pray his soul may rest in peace.

“You are gone, leaving behind a rainbow across the world.”

“Your Rainbow Mathematics: A Beautiful and Useful Bridge, Beyond the World”

In 2003 Professor Kobayashi said to me that there is Mathematics Awareness Month or MAM in the United States. I searched the website (http://mathaware.org/about.mam.html) with Professor Keijiro Yamazaki and others and found that MAM was initiated by the so-called Reagan Declaration and forcefully put in place to promote research at the national level with strong awareness of the utility of mathematics in societal problems and in every field. There was a strong awareness of the decline in mathematical ability of the student. In Japan the “lax education” became an issue. Noting that the rational number 22/7 is a good approximation to 22/8 is a good approximation to the number e, the base of natural logarithms, we made a proposal to Mathematical Association of Japan that July 22 through August 22 as the mathematics awareness month, and the proposal was ratified in 2005.

Professor Kobayashi travelled around the world, giving special lectures or attending symposia, and visited Japan once a year, allowing us to continue exchanging the information concerning the mathematics awareness month.

The MAM of the United States posts as its goal “To increase public understanding of and appreciation for mathematics,” whereas in Japan we have been striving to build “A bridge between mathematics and our society.” Every university is expected to serve as the core of our effort to develop various events of the MAM.

We would like to fulfill the wish of Professor Kobayashi by continuing to expand MAM events on July 22 through August 22, helping the society and the mathematical community of Japan to further flourish.

Postscript: Please see a forthcoming essay book (in Japanese) by Prof. Shoshichi Kobayashi entitled “Mathematicians who lost their faces” (to be published by Iwanami Publishing Co. on July 30, 2013), which includes an article “Math Circles.”